Broncos hold on to beat Red Mountain, improve to 4-0

In a close game with a lot of turnovers the Brophy Broncos held off the Red Mountain Lions 22-18 Sept. 11 at Red Mountain High School to improve to 4-0.

The Broncos managed to hang on and win, despite three turnovers that put Red Mountain in position to score.

The first quarter started scoreless until Cade Knox ’16 threw a four-yard touchdown pass to Chad McClanahan ’16 with 3:13 left in the quarter. Red Mountain blocked the point after attempt, giving the Broncos a 6-0 edge.

After a muffed punt, the Lions took over at the Brophy 10 yard line with 50 seconds remaining in the quarter. This was the first of the three Brophy turnovers.

Red Mountain was only able to come away with a field goal, making it 6-3 Broncos at the beginning of the second quarter.

“We overcame. Our question going into the week was ‘how will we respond when things go bad?’” said head coach Mr. Scooter Molander about the turnovers. “It’s the most important thing in sports and life, and we responded.”

After punts by both teams, and  the score board’s power shutting down making clock management difficult, Brophy strung together a long drive toward the end of the half, capping it off with a touchdown pass from Knox to Ryan Velez ’16.

The score remained the same until Walker Adams ’16 tackled a Red Mountain running back in the end zone for a safety late in the third quarter. This was set up by a 47-yard punt by quarterback Knox that was downed on the one-yard line.

“They lined up in a formation we knew … coach [Mr. Thurmond] Moore called a great blitz, the stars just sorta lined up and I did my job,” Adams said about the safety.

On the Brophy possession after the safety, Knox threw an interception and the Lions capitalized with a touchdown, making the score 15-10 Brophy with 2:46 left in the third quarter.

On the ensuing Brophy possession Knox threw another interception, and again the Lions capitalized making the score 18-15 Lions after a successful two point conversion, giving the Lions their first lead of the game.

Dropped passes were also an issue for the Broncos in the game.

“He had some dropped balls tonight, there were some great throws that just went between the hands of our guys, and that can be frustrating,” Mr. Molander said.

When the Broncos took several completions in a row set up a 29-yard touchdown run by Velez giving Brophy a 22-18 lead after a successful PAT by Jacob Silver ’16.

“I just didn’t want to let my teammates down, we weren’t going out with a loss that’s for sure,” Velez said about the run. He finished with 15 carries for 127 yards, as well as six catches for 39 yards.

With the Lions driving late in the fourth quarter Jimmy Hawkins ’16 intercepted the ball with 2:55 remaining, sealing the victory for the Broncos.

“They could not score, the defense needed to make a play, and it was made … we just kept hitting them in the mouth, it was a team effort,” Hawkins said.

The Broncos play away at Pinnacle next week, Sept. 18, as they try to maintain their perfect record. 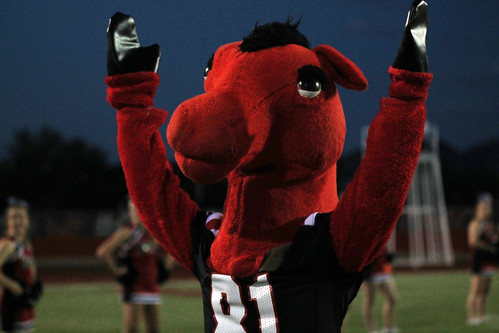