Broncos suffer 1st loss of the season at Pinnacle

Photo by Carter Van Winkle ’16 | Jimmy Hawkins ’16 returns a fumble for a touchdown Sept. 18 against Pinnacle. Pinnacle defeated Brophy 32-31 in a back and forth match up.

In a heartbreaking finish after a back and forth game, the Spencer Rattler-led Pinnacle Pioneers upset the Brophy Broncos 32-31 Sept. 18, who fall to 4-1.

Brophy’s offense rolled to start the game with a Cade Knox ’16 touchdown pass to Noah Pittenger ’17 on the first drive. Jacob Silver ‘’16 nailed the point after attempt, giving the Broncos a 7-0 lead that they maintained throughout the rest of the first quarter.

Pinnacle rebounded with a quarterback keeper touchdown to start the second quarter, but the Broncos blocked the point after attempt to hold on to a 7-6 lead.

Knox was bothered with interceptions throughout the first half, throwing one with 3:20 left in the first quarter and another with 9:51 left in the second.

The Pioneers made a field goal off of the second interception with 6:07 left in the half to take the lead 9-7.

The Broncos strung together a drive the next possession only to have it unraveled by holding penalties. Penalties were a major part of the game with 11 Brophy penalties in all, primarily with false start, offsides and holding.

“We had some untimely penalties, and I felt like our special teams made some big plays, and we also made some mistakes. We turned it over a couple times on offense and Pinnacle is a good football team. We’ll watch the film and regroup, and we’ll learn from it,” said head coach Mr. Scooter Molander on what the team can take away from this game.

Silver came up short on a 51-yard field goal that would have given Brophy a 10-9 lead, but Dante Diaz-Infante ’16 blocked a Pinnacle punt with 46 seconds left in the half, which set up a Velez touchdown run.

The Broncos kicked off to start the second half, and Pinnacle scored once again with 7:49 left in the third quarter to regain the lead 16-14 after a good point after attempt.

Pinnacle forced a three-and-out on Brophy’s next possession buthe Pioneers offense could not score and fumbled.

Jimmy Hawkins ’16 recovered the ball and ran it in for a touchdown from the 40 yard line with 5:09 left in the quarter. The point after attempt was good and Brophy took a 21-16 lead.

Pinnacle was not finished. A passing touchdown from freshman quarterback Spencer Rattler put them back on top 22-21 after a two point conversion attempt was stopped with 42 seconds left in the third quarter.

Velez took the ensuing kickoff 98 yards back for a score, taking back the lead and momentum for Brophy. After a good point after attempt, Brophy led 28-22 at the end of the third quarter

Velez finished with 20 carries for 153 yards and two all-purpose touchdowns.

The Bronco defense stopped Pinnacle, and the offense marched down the field again. Silver hit a field goal with 5:57 left in the game to give Brophy a 31-22 lead.

The Pioneers scored on a quick strike touchdown in only a minute and a half, and their defense stopped Brophy on their next possession. After the three-and-out, Pinnacle marched down the field once again.

Knox finished with 11 completions for 158 yards, one touchdown and two interceptions.

Coach Mr. Scott Heideman said it was not a tough loss.

“No it wasn’t. It’s only a tough loss if you didn’t learn anything. We learned something,” he said.

The Broncos host Desert Ridge next week, Sept. 25, as they try to bounce back and become 5-1. 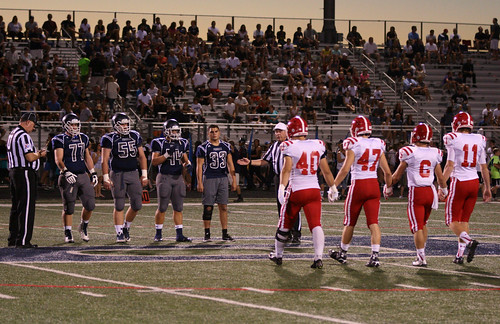