By Andrew Howard
THE ROUNDUP

For the second week in a row a late-game field goal handed Brophy a loss.

In a back and forth battle, the Desert Ridge Jaguars defeated the Brophy Broncos 30-28 at Phoenix College Sept. 25 despite racking up 11 penalties along the way.

Desert Ridge nearly doubled Brophy’s penalty count with 11 penalties for the Jaguars and only six for the Broncos, yet a field goal with 1:07 left in the game lead the Jaguars to a 30-28 victory.

“I’m proud of our guys for playing clean, they had more personal fouls than us, we put ourselves in a position to win and just couldn’t quite get it done,” said head coach Mr. Scooter Molander.

Brophy won the coin toss and elected to receive to start the game. After forcing a punt, Desert Ridge scored the first points of the game with a touchdown pass with six minutes remaining in the first quarter.

Brophy then strung together a drive and scored on a half-back pass from Ryan Velez ’16, but the touchdown was called back due to a holding penalty.

Velez then ran for a 31 yard touchdown on the next play. He finished with 91 rushing yards, the first time this season he has been held to under 100.

On the ensuing kickoff, the Jaguars returner ran it 99 yards for a touchdown, giving them a 14-7 lead with three minutes left in the first quarter.

Desert Ridge quickly got the ball back, and scored the first points of the second quarter to take a 21-7 lead.

Noah Pittenger ’17 then took the kickoff 94 yards for a touchdown, putting the broncos within a score once again. Pittenger finished with 120 total yards.

With eight minutes left in the half, Brophy called their final time out. On the next play Velez scored on a four yard touchdown run. This tied the game 21-21 going into half time.

The Broncos forced a turnover early in the second half and had the ball on the Desert Ridge 27, but missed a field goal and were unable to capitalize on the timely turnover.

“This is a tough loss, we lost a lot of opportunities and we need to be more consistent moving forward,” said quarterback Cade Knox ’16. “We have a bye week next week, and that will give us two weeks to prepare.”

Knox finished with 129 yards passing, and another 37 yards on the ground.

With 6:42 left in the third quarter, Rexx Tessler ’17 blocked a punt a returned it for a 51 yard touchdown. Tessler finished with four tackles.

The Broncos had a 28-21 lead, this would be their last score of the game.

After forcing a turnover the Broncos took over, but couldn’t get anything going and were forced to punt. Desert Ridge went on to score, but after missing the extra point, Brophy still had a 28-27 lead with around seven minutes left.

After forcing another punt, Desert Ridge strung together a long drive that ended with a field goal with 1:07 remaining, giving the Jaguars a 30-28 lead.

Despite their best efforts, including two hook and ladder pass plays, the Broncos were unable to get into field goal range and fell to the Jaguars 30-28. Brophy lost to Pinnacle Sept 18 after a field goal with less than a minute to play.

“It was a tough loss, but we can always learn from it, fourth and sixteen is a tough situation at the end of the game. We made mistakes on offense and defense … we just gotta look at the film and learn from it,” said tight end Matthew Kempton ’17.

The Broncos have next week off, but will then travel to Hamilton to take on the undefeated Huskies Friday, Oct. 9. 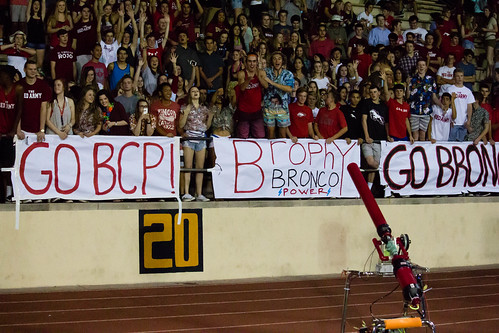