In a high scoring game Oct. 16 in which Cade Knox ’16 had two rushing and two passing touchdowns, the Brophy Broncos snapped a three-game losing streak by topping the Perry Pumas 42-35 at Phoenix College.

Brophy lost its last three games by a total of six points, so this week their goal was to finish, said head coach Mr. Scooter Molander.

“I’m really proud of our guys for fighting the whole game, and we did finish,” Mr. Molander said.

The Brophy defense got off to a shaky start, allowing a touchdown on the Puma’s first possession of the game, but the offense was able to respond with a touchdown of their own on a quarterback sneak by Knox.

The score was locked at seven to seven at the end of the first quarter.

Brophy scored with 11:52 remaining in the half on Knox’s second touchdown run.

The Brophy defense was able to force a turnover on downs the next possession, and the offense had the ball with good field position. The drive was capped off with a touchdown pass from Knox to Gabe Mendoza ’16, giving Brophy a 21-7 lead.

With it raining early in the day, field conditions were not great and caused many players to slip throughout the game.

“It was unbelievably hard coming out of your stance and trying to keep your feet; the upside is it affected [Perry’s] offense too,” said defensive lineman George Rivera ’17.

Perry’s next drive finished with a field goal making it 21-10 with around six minutes left in the first half.

“He’s made a 52 yarder this year, so I asked him ‘you got it in you?’ He said ‘yes coach,’ and when a kid believes in himself like that you let him kick it. He got it to the end zone and that’s alright,” Mr. Molander said.

Brophy would receive to start the second half, and on the ensuing possession Noah Pittenger ’17 took a screen pass 61 yards for a touchdown. This gave Brophy a 28-10 lead. Pittenger finished with 167 total yards.

Perry responded with a long touchdown pass of their own, and after forcing a Brophy punt, scored another touchdown on a 42-yard pass, putting the game within three points heading into the final quarter.

Ryan Velez ’16 scored a five yard touchdown run on Brophy’s next possession, making it 35-25 with around 10 minutes left. Velez finished with 151 total yards and two touchdowns.

Quarterback Knox was playing both ways throughout most of the game. Knox and Hunter Trueman ’17 split the time at safety.

“It’s definitely a challenge, I’m not going to say I was perfectly fine … but with the adrenaline and the guys out there you don’t even think about it,” Knox said.

Middle linebacker was an area of question before the game. Brett Taylor ’17 and Max Fees ’17 switched off each possession throughout the game. Starting middle linebacker and team captain Walker Adams ’16 re-tore his ACL last friday against Hamilton and will miss the remainder of the season.

Perry was able to score on another long pass on their next possession, with a 50-yard pass with 9:17 left in the game, making the Brophy lead only three points.

Knox threw an interception with around seven minutes remaining, giving Perry the ball in Brophy territory. Perry was able to come away with a field goal, tying the game at 35-35 with six minutes left.

With 44 seconds left, Perry had the ball on the Brophy 26 yard line.

Despite two sacks on this drive, including four star recruit Connor Murphy ’16’s first sack of the season, Brophy struggled to tackle the quarterback all night.

“He was a great scrambler, I’m proud of our D-line for containing him, and the defense backs for covering the receivers,” Rivera said.

On the final play of the game, the Perry quarterback heaved a hail mary to the end zone. Dante Diaz-Infante ’16 was able to intercept the ball and seal the win for Brophy.

“Overall we made some adjustments and got some pressure on the quarterback and forced an errant throw and I think that was the difference,” Mr. Molander said. 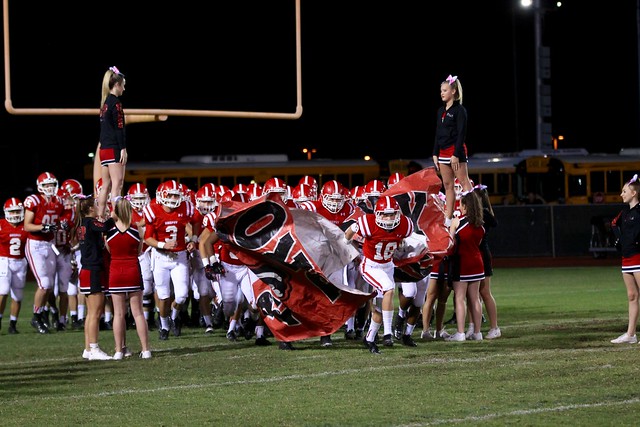