Hamilton squeezes past Brophy with big 2nd half

By Anthony Cardellini ’17
THE ROUNDUP

For the third week in a row, an opponent’s late field goal resulted in a Brophy loss.

This time, it was the Hamilton Huskies that converted a 20-yard field goal attempt in overtime to defeat Brophy 38-35 Friday, Oct. 9.

Hamilton, coming into the game ranked in the top 20 nationally, remained undefeated while sending the Broncos to 4-3 on the season.

Brophy head coach Mr. Scooter Molander said that he was proud of the way Brophy played, despite the result.

“I’m really proud of our guys—they battled all night. Great effort, on both sides, in all phases of the game,” he said.

The Broncos jumped out to a fast start when Jimmy Hawkins ’16 intercepted Lockhart on Hamilton’s opening drive. After marching down the field, a 12-yard pass to Pittenger put Brophy up 7-0 with 7:18 to play in the opening quarter.

Hamilton then muffed Brophy’s subsequent kickoff and Hawkins recovered the fumble, putting the Broncos on Hamilton’s 29 yard line. A one-yard run by Ryan Velez ’16 gave Brophy a 14-0 lead with 3:00 to play in the first quarter.

Velez finished with 52 yards on 17 carries.

After a few fruitless possessions by both sides, Hamilton scored with 6:49 left in the second quarter on a 12-yard run.

With 1:25 left in the half, Brophy answered this touchdown with a 30-yard Knox pass to Kempton.

Hamilton’s next drive ended in a fumble recovered by Jacob Collins ’16. Brophy quickly went down the field and scored with 0:28 seconds left in the half on a 12-yard pass to Kempton. The score at the end of the first half was Brophy 28, Hamilton 7.

Knox credited the Broncos’ strong start to their game plan, given the two weeks they had to prepare for Hamilton after a bye week.

“We had a good game plan going in,” he said. “We were able to execute on a good number of plays. They had a few mistakes early and we were able to take advantage of them.”

Hawkins said that the early energy of the game helped the Broncos take a large first-half lead.

“We had the energy,” he said. “We wanted to win the game really bad. For all the seniors, our goal was to beat Hamilton.”

The third quarter went by quietly, with only a Brophy missed field goal as the main action of the period. The snap of the field goal was fumbled and the kick ended up short.

Hamilton scored quickly on a five-yard pass with 11:49 to play in the fourth quarter, bringing them within 14 points.

Penalties plagued the next Brophy drive, which ended in a punt. Hamilton then marched down the field and scored on a 17-yard pass, bringing them within seven.

Hamilton got the ball back quickly after another short Brophy drive.

Upon reaching the goal line, Brophy defenseman Walker Adams ’16 walked off the field with what appeared to be an injury. He was out the previous season with a torn ACL, however no additional information was available Friday night.

A few quick completions for Hamilton put them in front of Brophy’s goal line, where they scored with 0:25 left in the game on a three yard pass to tie the game at 35.

The game progressed to overtime, where each team gets the ball on the opponent’s 10-yard line with four downs to score. Whichever team scores more points is the winner of the game.

Brophy received the ball first. A pass complete in the end zone to Chad McClanahan ’16 gave the Broncos what appeared to be the lead, but the referees ruled offensive pass interference. Brophy was moved back and ended up missing an attempted 47-yard field goal.

Hamilton used its first three plays for short gains to set up for a 20-yard field goal. The attempt was good, giving Hamilton a 38-35 victory.

After Brophy outscored Hamilton 28-7 to in the first half, Hamilton turned the tables and outscored the Broncos 28-7 in the second half.

Hawkins said that Hamilton’s success in the second half was due to Brophy’s mistakes.

“We made some mistakes, we blew some coverages,” he said.

Knox said that Brophy was unable to answer the halftime adjustments of Hamilton.

“They made adjustments … they’re a great team,” he said. “Both sides played a great game. The offense needs to be able to adjust.”

Overall, Knox and Hawkins said despite the loss the game showed them that they could compete with the best teams in the state, if not the country.

“We now know where we can stand with the top-ranked teams,” Hawkins said.

Even though the Broncos have dropped three games in a row, they have lost by a combined total of six points across those match ups.

Mr. Molander said he was also proud of the effort in the game.

“We made them earn every yard and every point they got … it was a great-fought game,” he said. 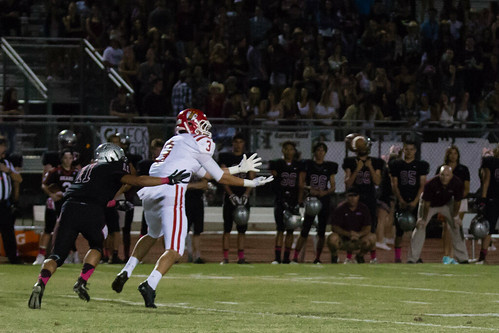