Photo by Michael Placenti ’19 | Ryan Velez breaks through the Basha defense Oct. 30. Velez finished with 340 rushing yards and five touchdowns as Brophy defeated the Basha Bears 49-42 in overtime in the final game of the 2015 regular season.

In a game in which Basha led for 47:06, Brophy rallied in overtime and with the help of 340 rushing yards and five touchdowns from Ryan Velez ’16 to defeat the Bears 49-42.

“It wasn’t all me,” Velez said after the game Oct. 30. It was definitely the o-line. They kept me going and I just kept grinding. I just followed my lead blockers and I knew I would get to the end zone.”

The game was delayed 30 minutes due to heavy rain and lightning on Basha’s Senior Night.

Basha was able to score on a 10-yard run in the middle. After missing the point after attempt, the Bears led 6-0. They were able to score another touchdown on a lengthy drive to increase their lead to 14-0 after a good two-point conversion to end the quarter.

Basha recovered their own pooch kick to start the second quarter, but Knox, also playing on defense, intercepted a pass in the end zone to swing the momentum back to the Broncos.

Brophy scored on a nine-yard touchdown rush by Ryan Velez ’16 with 11:28 left in the half, trailing only by a touchdown after a good PAT.

Basha ran nine times on their next drive, capping it off with a 10-yard quarterback-keeper score with 6:47 left in the second.

Brophy marched down the field but the Basha defense held up in the red zone, holding the Broncos to a Jacob Silver ’16 26-yard field goal with 3:37 left in the half.

Basha continued their offensive onslaught with a touchdown pass to end the half leading 28-10 after a good point after attempt.

Brophy kicked off to start the second half, and the defense buckled down forcing a punt.

Velez took over during the first drive, rushing five times in all and scoring a touchdown with 6:42 left in the third to bring the Bears’ lead down to 12 after a good PAT.

The Bronco defense forced another punt and Velez responded with another rushing touchdown of 21 yards to make the game 28-24 after Silver hit the point after attempt with 1 minute left in the third quarter.

Basha scored on the first play of the fourth quarter to restore a two possession lead. The Bronco offense could not do anything on the next drive, failing to convert a fake field goal pass.

On the next Basha drive, Brophy forced a punt that led to another Velez touchdown, his fourth on the day. The two point conversion was no good, and Basha led 35-30 with 6 minutes left in the game.

The Bears scored on a 39 yard touchdown run the next drive, taking a 42-30 lead with 5 minutes left in the game after a good extra point.

Knox connected with tight end Matthew Kempton ’17 on a 15-yard touchdown pass to make the score 42-36 after a missed extra point with 3:40 left in the game.

Brophy recovered the onside kick but turned it over the next play with a fumbled snap.

Brophy stopped the Bears offense and regained possession at their 35, capping off a lengthy drive with another Velez touchdown run.

Brophy’s PAT was blocked, so the game was tied 42-42 with 54 seconds left and stayed that way until the end of regulation.

The Broncos got the ball first to start overtime, scoring on a 12-yard Cade Knox rushing touchdown. Knox flipped over multiple defenders to reach the end zone and score.

“I don’t know, I was hoping to God I didn’t die to be honest with you,” Knox said of the dive over the goal line. “I’ve always wanted to do that in my life but I don’t know if I’ll have to do it again. That was pretty scary.”

Knox finished 9-21 for 181 yards, two total touchdowns and an interception.

Defensive end Dante Diaz-Infante ’16 batted down two consecutive passes at the line of scrimmage on the ensuing Basha possession. Velez sniffed out Basha’s trick play on third down and the Bronco secondary blanketed the Bears’ shot to the end zone on the last play of the game, sealing the Bronco victory.

Velez finished with with 34 runs for 340 yards and 5 touchdowns.

“We believe in one another, coaches believe in each other, and the guys—they fight,” said coach Mr. Scooter Molander. “That’s Brophy football. They never quit. They play for one another. We made some good adjustments at halftime and we got after it.”

Brophy hosts Pinnacle in the first round of the state playoffs Nov. 6 in a rematch of their Sept. 18 32-31 loss. 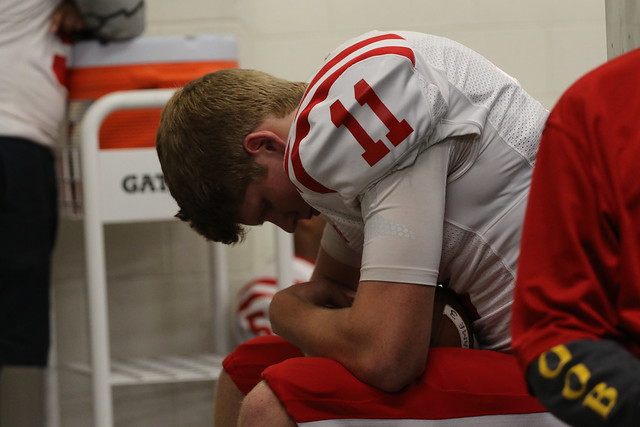