Pittenger rushed for 120 yards and three touchdowns on 20 carries.

Brophy deferred to start the game, and forced an immediate Desert Vista three-and-out.

Struggles on special teams lingered through the game. Brophy had to re-kick the ensuing kickoff three times.

“Our defense, a few times they bent but never broke and we got a turnover early,” Mr. Molander said.

Brophy couldn’t capitalize on the turnover, throwing an interception the next play.

Brophy’s defense held firm the next drive, getting the offense the ball back at their own 25 yard line before the end of the first quarter.

Ryan orchestrated a lengthy ensuing drive. The Broncos advanced into Desert Vista territory after a Thunder pass interference and a Pittenger 10-yard run.

Pittenger finished off the 10-play drive with a 9-yard touchdown.

The offense regained possession on their own 29 yard line but Brophy threw an interception the next play.

“There were still too many mistakes that we made offensively. We shot ourselves in the foot a few times, just missed some opportunities,” Mr. Molander said.

Desert Vista and Brophy traded three-and-outs. Desert Vista couldn’t capitalize on their next drive, failing to convert on fourth down.

Pittenger broke off a run to Desert Vista’s 36 yard line, but Brophy couldn’t convert on a 46-yard field goal attempt.

The defense pitched a shutout in the first half, and the Broncos took a 14-0 lead into halftime.

Nicholson returned the second half opening kickoff 70-yards, and Pittenger ran for a 25-yard touchdown on the next play.

Mr. Molander said this shifted the game’s momentum to Brophy.

“I think a big huge momentum play for us was the opening kickoff of the second half where Nico Nicholson took it all the way down to about the 25-yard line and then we were able to capitalize on the very next play with a great call by our offensive coordinator coach [Mr. Bill] Kalkman, which got us in the end zone on a great run by Noah Pittenger,” Mr. Molander said.

The Thunder and Broncos were unable to convert on fourth down on their next two drives, the third failed fourth down conversion of the game for Desert Vista.

At the end of the third quarter, the Broncos led 21-0.

“We were able to run the ball effectively in the second half to bleed some clock,” Mr. Molander said.

Desert Vista strung together a six-play drive in the fourth quarter. They got on the scoreboard with 4:14 left in the game with a three-yard run after a 46-yard gain.

“The game is never over,” said defensive tackle George Rivera ’17. “They came back and they drove on us late in the game and we just gotta keep that fight in our mind and just always remind ourselves that we gotta keep going hard and just do what we do.”

Rex Linthicum ’17 sacked Desert Vista the next drive, and the Thunder turned it over on downs.

Rivera credited the win to preparation and an excellent game plan.

“A lot of hard work and preparation on both sides of the ball,” he said. “We had great game plans and we just came out here and we executed on both sides and did what we had to do.”

Mr. Molander said this was a team victory.

“Overall, good team victory on the road 21-7 against a very talented ball club like Desert Vista,” he said. “There’s plenty of work to be done, we’re happy with the victory and we’ll move forward.” 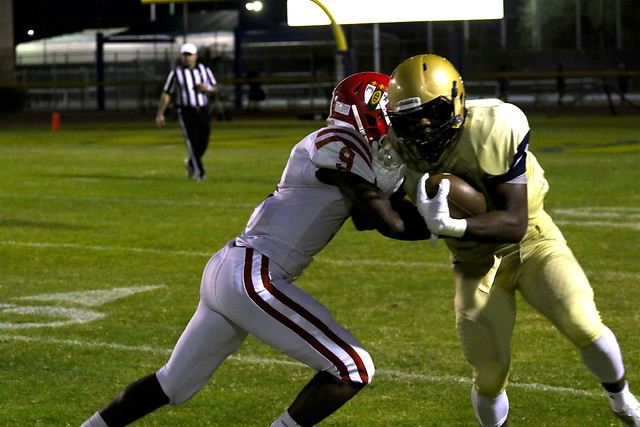