By Hayden Welty ’19
THE ROUNDUP

Defense reigned in a game Friday, Sept. 23 that included eight turnovers and swapping three and outs.

In the end Brophy kept an undefeated record of 6-0, edging out the Mountain View Tories in a 20-17 win at Phoenix College Sept. 23.

Mountain View began the game with the ball, but Brophy’s defense quickly forced a three-and-out. However, Noah Pittenger ’17 muffed the punt, allowing Mountain View to get the ball back with improved field position.

On the second play of the drive, Jordan Briggs ’17 picked off Mountain View with 9:59 to go in the first quarter.

After two minutes of play, there had already been two turnovers. And by the time the game ended, both teams turned the ball over a total of eight times.

“I think that it’s just some poor decisions made,” said quarterback Matt Ryan ’17 of the offense’s turnovers. “… We didn’t reach our potential, obviously. “

“We’re going to work on a lot of ball security drills, a lot of tracks with the running backs, getting the handoffs to them,” Ryan said. “And we have to just clean up a few mistakes, and we’ll be good.”

On the first two plays of Brophy’s first drive, Pittenger ran for a total of 18 yards. Then, after two incomplete passes, Brophy faced a third and ten.

Nico Nicholson ’17 caught an 18-yard pass from Ryan to move the chains. And another Nicholson 12-yard catch allowed Brophy to get into red zone territory.

Pittenger capped off the 11-play drive off with a 1-yard run. Trevor Eldean ’17 converted the extra point.

On the next two drives, Mountain View fumbled, and Brophy’s offense went three and out.

Mountain View moved down the field and scored on a 48-yard touchdown run on their next drive. After a converted extra point, the score was Brophy 7 Mountain View 7.

After a Nicholson 53-yard kickoff return, Brophy moved the chains and were able to get into the red zone on their next drive.

Pittenger scored on an 8-yard run. However, Brophy received an illegal formation penalty, causing the play to be called back.

After the penalty, Brophy was not able to score a touchdown, but Eldean kicked a 25-yard field to make the score Brophy 10 Mountain View 7.

“In weeks before, we’ve really come out and done really well, and I feel like all of our potential wasn’t exactly on the field tonight,” Ryan said. “I think we could’ve gave more. We’re going to work at it, and we’re going to come back better next week.”

On the kick return after the touchdown, Pittenger caught the ball and handed it off to Nicholson who ran the ball all the way into the end zone for a 95-yard kick return. Eldean made the extra point.

“Tremendous,” said head coach Mr. Scooter Molander of Nicholson’s performance. “He can’t be tackled one on one… He had an awesome ballgame.”

“Nico is unbelievable,” Ryan said. “When the games close, he’ll make it count; he’ll leave it all on the field.”

Both teams traded possessions and Brophy changed quarterbacks; Ryan came out for Caleb Moore ’17 on the drive before halftime.

“We were just looking to surprise the defensive, switch it up a bit,” Ryan said. “We’ve done it before.”

The Broncos settled for a 43-yard field goal. Eldean missed the attempt.

“Caleb started the first two games, [but he] broke his thumb,” said Nathan Moorman ’17. “[The coaches] wanted to see him for a few drives, just seeing how he did; they wanted to run with the hot hand.”

At halftime, the score was Brophy 17 Mountain View 14.

During the first three drives of the second half, each team turned the ball over to the each other.

“The defense is essential,” Ryan said. “Even when we did turnover the ball, they would get it right back for us.”

During Mountain View’s second drive of the half they converted a field goal, tying the game up at 17.

Two drives later, Brophy, with Ryan as their quarterback, started with the ball on their one-yard line. On the first play, Pittenger ran for a 40-yard rush, and a Mountain View penalty added 15 yards, taking Brophy from their own one-yard line to the opposing 44-yard line.

Brophy continued to advance into the red zone but was stopped at the 16-yard line. Eldean converted the game-winning 26-yard field goal.

After that, both teams traded possessions for the remainder of the game, and neither scored again.

“Our defense was tremendous, we made some big plays on special teams, and we were able to move the ball offensively, which helped us in the second half even though we didn’t get a whole lot of points,” Mr. Molander said. “Really proud of our defense, stepped up huge.”

“We’re tenacious, we keep going,” Fees said. “Every play is a challenge that we’re ready to accept, and we’re ready to conquer; we came here to dominate, and that’s our mindset going into every down.”

Mr. Molander said he thought it was a tough game.

“Rather win ugly than lose close,” Mr. Molander said of the result.

“We have a tough, mentally strong senior core, and we have a good spirit on this team,” Mr. Molander said. “And sometimes that can carry, despite you’re not playing the best football.”

Fees said their effort paid off.

“We had tremendous effort—across the field,” Fees said. “We had guys who stepped it up… It’s a team effort, and you could clearly see that tonight on the field.”

“I don’t think anyone had us at 6-0 at this point, and that’s OK,” Mr. Molander said of Brophy’s undefeated record. “We just go about our business.”

Brophy will attempt to defend their perfect record next week as they host Hamilton High School at Phoenix College Friday, Sept. 16 at 7 p.m. The Huskies boast a 4-1 record and are ranked as the 8th best team in Arizona. 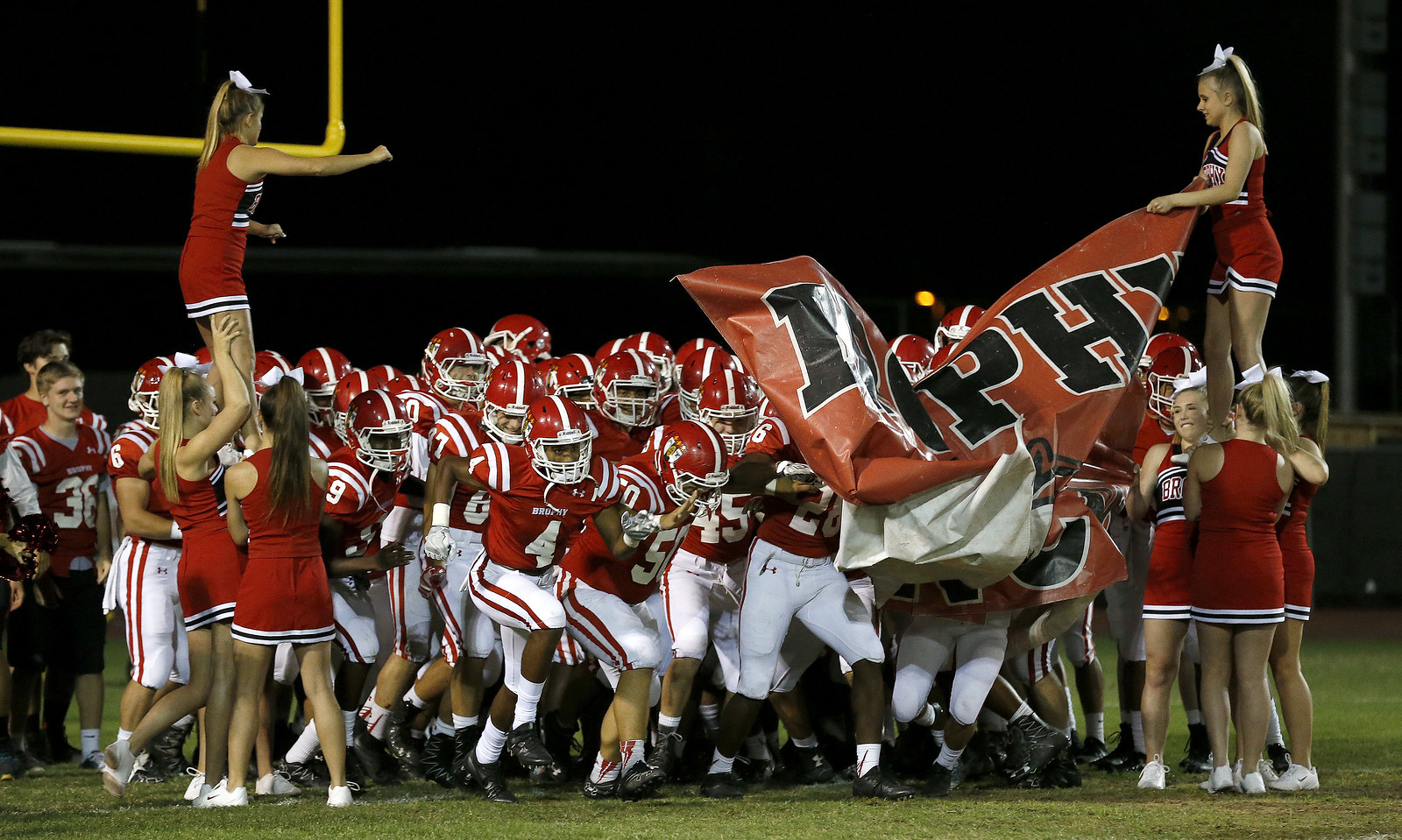