Basha’s Ryan Kelley threw for three touchdowns to lead the Bears over Brophy 27-24 during the Oct. 8 Homecoming game at Phoenix College.

Kelley threw his first touchdown of the game, a 51-yard pass, to give the Bears a 6-0 lead with 9 minutes left in the first quarter. Noah Williams ’17 blocked the ensuing point-after attempt.

Brophy responded with a lengthy drive. The 11-play drive was capped off byMatt Ryan ’17’s 11-yard touchdown pass to Matthew Kempton ’17. Trevor Eldean ’17 made the extra point to give Brophy a one-point lead.

Brophy held a 7-6 lead at the end of the first quarter.

A Kelley 60-yard scramble set the Bears up for a one-yard touchdown run. The Bears converted the two-point attempt to take a 14-7 lead.

Erik DiMaria ’18 filled in for an injured Noah Pittenger ’17, rushing seven times for 30 yards over the course of a second-quarter drive.

Eldean knocked down a 10-yard field goal attempt to cut down Basha’s lead to four to end the second quarter.

“We just didn’t come out here and execute as well as we could have,”Kempton said. “A lot of botched plays and things like that. There’s just a lot of stuff to clean up.”

Brophy received the kickoff and turned the ball over to start the third quarter, but the Broncos recovered a Basha fumble at midfield.

“We didn’t finish a couple drives,” Mr. Molander said. “We turned it over one time … We had really long drives and both teams really took a lot of time off the clock and so there were very few possessions in this ball game for either team.”

Caleb Moore ’17, in for Ryan, threw a 33-yard pass to Nate Moormon ’17 to set the Broncos up on the one-yard line. Pittenger ran it in for a touchdown to give the Broncos a 17-14 lead with 3:17 left in the third quarter.

Basha responded with a 45-yard touchdown pass, Kelley’s second of the night.

On the next Brophy possession, the Broncos faced a fourth down from Basha’s six-yard line down 21-17. Moore connected with DiMaria for a 6-yard score. Brophy took a 24-21 lead with 2:50 left in the game.

Kelley wasn’t done offensively. He led the Bears down the field and lobbed a 35-yard touchdown to give Basha a 27-24 lead after a blocked extra point attempt.

Moore moved the Broncos down the field, connecting with Elisha Brooks ’19,Nico Nicholson ’17 and Moormon to put the Broncos in field-goal range afterPittenger’s run to the 16-yard line.

But Brophy couldn’t convert on a 34-yard field goal and fell to 7-1.

“We had a chance there at the end to tie it up and to go overtime,” Mr. Molander said. “I’m proud of our guys, we didn’t quit, we fought … We didn’t get it done.”

Kempton said that the team is focused on improving.

“It’s a little humbling, this loss,” Kempton said. “We’re still having a great season. Obviously, you never want to lose but this just shows us that we can still always improve. We’re going to keep improving.” 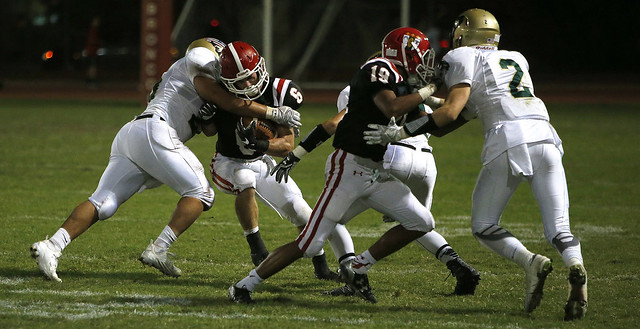