Brophy went into the second half Nov. 10 with a 26-14 lead, but it wasn’t enough to stop Red Mountain.

Brophy lost to Red Mountain 34-33 at Central in the AIA quarterfinals.

“It was a very good year with great senior leadership, and we came up one point shy tonight,” said head coach Mr. Scooter Molander.

The first score of the game came after a snap that went over the head of the Red Mountain quarterback and led to a Brophy safety.

Noah Pittenger ’17 went on to score another touchdown, and Brophy led 19-7 with little time remaining in the first half.

Red Mountain scored, and then Caleb Moore ’17 threw a touchdown pass to give Brophy a 26-14 lead. Brophy would only score once in the second half.

Brophy’s defense could not hold the Red Mountain running back in the second half, who scored all of their second half points.

With around five minutes remaining, Red Mountain scored a 33-yard touchdown run, giving them the one point lead.

Brophy was forced to punt on the next possession. On defense, it appeared Max Fees ’17 had intercepted the ball off a deflection, but the officials ruled it an incomplete pass.

Brophy could not hold them after that and time expired.

“We made a few too many mistakes tonight, mental mistakes, but we did a lot of great things, and we’ll get better,” Mr. Molander said. “Right now we need to thank the seniors for a great season, and we need to thank our fans for their support.”

Editor’s note: I’ve covered a lot of games for Brophy football, starting with a game against Chaparral my sophomore year, and I just want to thank everyone who has read these articles.

This has been a fun and emotional three years, and I would recommend that anyone interested in covering sports get involved. Covering games has been a huge part of my time at Brophy, and I am sad to see it end, but I am extremely happy to have had this privilege.

To the players, coaches and fans who read these articles, I just want to thank you, it makes staying up late writing after games all worth it.

If you have any questions about getting involved in sports coverage for The Roundup, email me at AHoward17@brophybroncos.org. 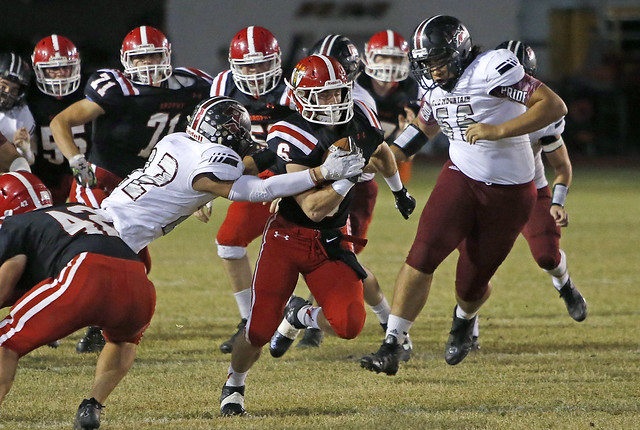