Photo by Bryce Owen ’17 | Noah Pittenger ’17 hurdles a defender at the goal line for the touchdown vs Pinnacle Saturday, Aug. 20.

The 2016 Sollenberger Classic was delayed 70 minutes due to lightning and a car collision.

“Coming up, there was a rollover car,” said head coach Mr. Scooter Molander. “Our team got out and helped and it really put things in perspective as to what’s important in life: our families, our health. We can never take that for granted. In a way it was a blessing all around. The two people in that car are going to be ok. That reset our brain into ‘enjoy the moment, don’t get ahead of yourself, be thankful that we get to play this game!”

Brophy received to start the game and the team was stagnant on the first two drives, a Brophy three-and-out and a Pinnacle field goal.

However, quarterback Caleb Moore ’17 connected with wide receiver Robert Brooks ’17 for a 34-yard reception on Brophy’s second drive of the day.

The nine play drive was capped off with a Pittenger 15-yard touchdown run.

Two plays later, the Pioneers fumbled the kickoff and Anthony Quintana ’17 picked it up at the Pinnacle 25 yard line.

Pittenger hurdled two defenders en route to a 14-yard touchdown run. After a made Trevor Eldean ’17 extra point, the Broncos led 14-3 with 2:42 left in the first quarter and never looked back.

Pittenger finished with 15 carries for 106 yards and two touchdowns.

“It felt great,” Pittenger said on his two touchdown runs. “I can’t do it without my linemen though, so thanks to them.”

A tightly contested defensive battle was the story for the rest of the half. Brophy and Pinnacle exchanged punts the next two drives after Brett Taylor ’17 sacked sophomore Pinnacle quarterback Keegan Schenk.

On the ensuing Brophy possession, Moore threw an interception to give Pinnacle the ball on the Broncos’ 32 yard line.

The Broncos’ defense forced another Pioneer punt, and Matt Ryan ’17 was in at quarterback for Brophy. He threw an interception to give Pinnacle the ball at midfield with 2:30 left in the half.

The Pioneers advanced the ball to the goal line, but Brophy forced a fumble.

“Our defense set the tone early, I’m really proud of them,” Mr. Molandersaid. “[Mr.] Thurmond Moore, our defensive coordinator, did a heck of a job. [We had] senior leadership on the defensive side of the ball.”

Caleb Moore took the field, and the Broncos took a 14-3 lead into half time.

Pinnacle received to start the third quarter, but Jordan Briggs ’17intercepted Schenk’s first throw of the second half.

Brophy settled for a 50-yard Trevor Eldean field goal to give the Broncos a 17-3 lead with nine minutes left in the third quarter.

“On special teams, I felt we did a nice job there as well,” Mr. Molander said. “[Mr.] Cal Newman does a great job with our special teams. Trevor Eldean, our kicker and punter, did a heck of a job today.”

Eldean finished one for two on field goals with five touchbacks.

In the resulting Pioneer drive, the Broncos forced another fumble and recovered it at Pinnacle’s 32 yard line. Once again, the offense had to settle for a field goal but Eldean’s attempt hit the left upright.

Pinnacle’s next possession was decided by three Max Fees ’17 sacks.

“Those three sacks were great,” Fees said. “When somebody makes a play like that, it just means that the ten other guys on the field are doing their jobs. I might be the one with that first hit but I know I’ve got 10 other guys that are going to be right there with me.”

“We really emphasize hustle on this defense,” Fees said. “It’s something that we’re always going to emphasize, each day, each week, each play. It’s always the small things that add up.”

The succeeding Brophy drive was capped off by a 93-yard pass from Caleb Moore to Robert Brooks. After a made point after attempt by Eldean, Brophy led 24-3 with two minutes left in the third quarter.

Brooks finished with four receptions for 141 yards and a touchdown.

Brophy scored again on an Erik Dimaria ’18 run to make the score 31-3 Brophy with 4:23 left in the game after a converted Eldean point after attempt.

Michael Grindey ’18 recovered a fumble with 3:39 left in the game. Brophy gave Pinnacle the ball back after Ross Velez ’18 fumbled at the 25 yard line.

Pinnacle scored a touchdown with 0:23 left in the game to cut Brophy’s lead to 21.

The Broncos recovered the Pioneers’ onside kick to end the game.

Pittenger said he thought the key to the win was practice and positivity.

“Everyday I practice,” Pittenger said. “We have to come out with a positive attitude thinking that we’ll win the game … I’m looking forward to working with all of my teammates throughout the season, I know we’re going to have a good one.”

Fees echoed the sentiment on practice.

“We’ve been working hard since way back in the spring,” Fees said. “We were ready to show them who took them down and I think that we wanted to bring that same intensity here today … They had to overcome some things, but I think coach [Mr.] Moore and everyone on the team has been working really hard for this.” 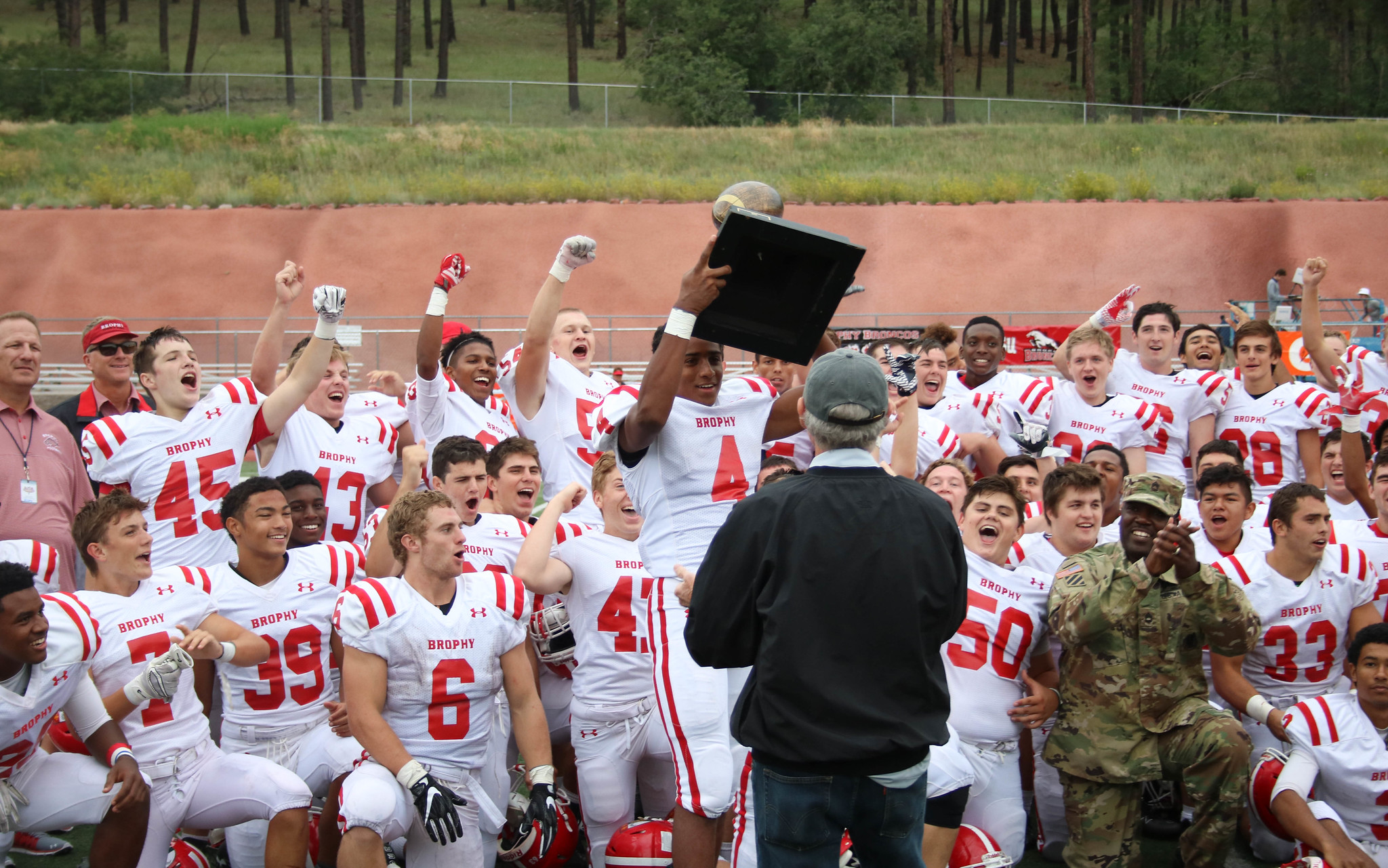