Perry defeats Brophy in back and forth game

After a first-half lead Brophy did not score in the fourth quarter and lost to Perry 35 to 27 Oct. 14 in a back in forth game filled with penalties at Perry High School.

With 1.6 seconds left, Brophy still had a chance to win but they were unable to complete the hail mary pass thrown by Caleb Moore ’17.

“We had a chance until the very end and I’m proud of our guys,” said head coach Mr. Scooter Molander.

Brophy scored on their first possession after a drive in which Noah Pittenger ’17 touched the ball on four of the five plays, including a two yard touchdown run.

The Broncos switched quarterbacks on every play, alternating between seniors Moore and Matt Ryan.

Mr. Molander said alternating allows the offense to play faster, and that he likes the different things each quarterback brings to the table.

Brophy quickly forced a turnover and had the ball on Perry’s side of the field, but was only able to come up with a field goal, which was a common theme throughout the night.

“We got some turnovers early in the ballgame and we needed touchdowns more than field goals,” Mr. Molander said.

Brophy forced two more turnovers on ensuing drives, but came up empty after a punt and a blocked field goal.

Perry’s first score of the night did not come until there was 4:39 remaining in the first half. They scored on a 66-yard touchdown pass.

Penalties were a big reason Perry did not score until so late in the half; they had nine false start penalties in the first half alone. At one point they had three in a row.

Also during that drive, defensive tackle George Rivera ’17 went down with an apparent knee injury, and his presence would be missed throughout the rest of the game.

“He’s a heck of a player, he’s an all conference player, he’s a two gap player and he was one of the heart and soul guys of our defense, and it doesn’t help when he goes down,” Mr. Molander said.

Rivera had advice for the team after his injury.

“I’m gonna be there coaching and doing as much as I can, but it’s rough,” he said. “All I can say to them is to keep working hard and focus on your technique and you’ll be good.”

Brophy quickly responded to the Perry touchdown with one of their own, coming from another Pittenger run.

Pittenger ran for 166 yards in the game, again touching the ball six of the eight plays on the scoring drive.

Perry responded scoring with 19 seconds left in the half, after a missed extra point it was 17-13 at half time.

Brophy forced a turnover to start the second half, and the drive ended with a two yard QB sneak by Ryan. The score was 24-13.

On the next drive Perry scored a touchdown and two-point conversion to make it a 3 point game.

Perry then tried an onside kick. Brophy recovered and had the ball at the Perry 45, but the Broncos only came away with a field goal, their last points of the night, coming with one minute still left in the third quarter.

Perry scored a touchdown and took a 28-27 lead. On the ensuing drive Trevor Eldean ’17 missed a 49-yard field goal.

Perry scored another touchdown, and had an eight point lead with four minutes left.

Brophy was left with a fourth and eight they could not convert, and Perry took over with two minutes left.

Brophy got the ball back with 25 seconds left, and was able to get to their own 45 yard line.

With 1 second left, Moore’s pass fell incomplete, and was short of the end zone regardless. The final score was 35-27.

Rivera said they learned one main thing from this game.

“No team is ever down and we need to keep our foot on the pedal and keep going through the game and finish the game, we obviously didn’t do that tonight but it’s something we can work on,” he said.

Brophy will play Chandler at Chandler next week and try to improve after back to back losses. Brophy is 7-2. 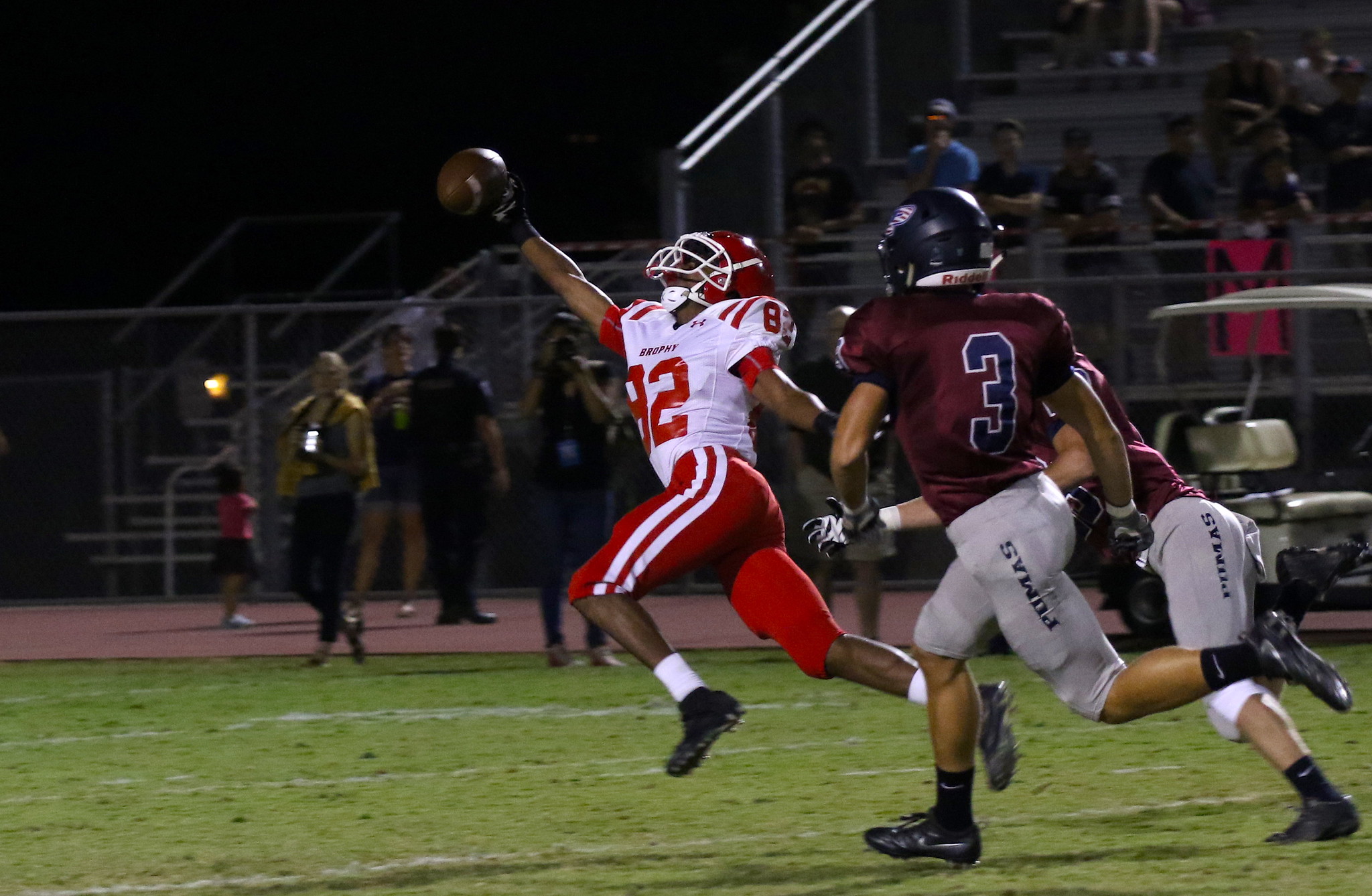