Photo by Hunter Franklin ’19 | A pass bounces out the hand of Jimmy Hawkins ’16 Oct. 23 against Chandler High School. The Chandler Wolves defeated the Brophy Broncos 28-6 during Brophy’s Homecoming and Senior Night at Phoenix College.

The game was close throughout the first half Oct. 23, but by the end the top ranked Chandler Wolves pulled away from the Brophy Broncos.

Despite the loss, Brophy head coach Mr. Scooter Molander said he believed there were takeaways from the game.

“The two top ranked teams in the state, Chandler and Hamilton, and we’ve battled them both hard … I’m inspired to keep working and so is the rest of the staff,” Mr. Molander said.

Mr. Molander also said that coach Mr. Thurmond Moore had great insight on what Chandler does on each side of the ball, being Chandler’s former defensive coordinator.

Mr. Molander also praised Mr. Moore’s son and scout team quarterback Kaleb Moore ’17, who was a backup quarterback for Chandler before his switch to Brophy.

“He knows their offense very well, he did a great job as well as the rest of our scout offense,” Mr. Molander said.

The game started off with a 74-yard touchdown run for Chandler, putting Brophy in an early hole.

The score would remain 7-0 at then end of the quarter after a missed Brophy field goal.

Big plays would continue to hurt Brophy, as Chandler scored the next touchdown with a 45-yard pass early in the second quarter.

Brophy strung together a long drive, but it ended with an interception on the two yard-line. The score was 14-0 at halftime.

Quarterback Cade Knox ’16 also said there were takeaways from the game.

“We fought hard … the score didn’t reflect the game. Come playoffs we know what to expect, the plays were there we just didn’t take advantage of them,” Knox said.

Chandler scored their last two touchdowns of the game in the third quarter, one coming on a double reverse to go up 28-0.

Brophy’s only score of the game came with around two minutes remaining. After a failed two point conversion, the final score was 28-6.

Brophy will play Basha on Thursday, Oct. 29 in a Cox televised game. It is the final game of the regular season.

More photos from the game and Homecoming activities: 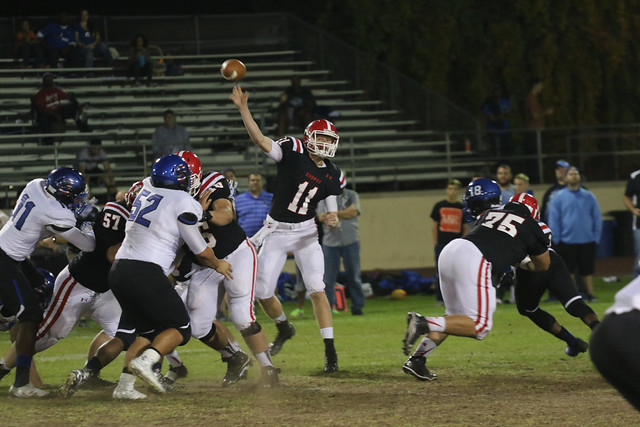