Photo by Bryce Owen ’17 | Cade Knox ’16 stiff arms a Mountain Pointe defender Nov. 13 while running the ball. Brophy lost to Mountain Pointe 35-31 in the quarter final round of the 2015 state football playoffs.

In a season that has been marked by dramatic finishes and close losses, Brophy found themselves 16 yards from a game-winning touchdown Nov. 13 against Mountain Pointe with five seconds on the clock.

In the end the Broncos could not get into the end zone and lost another close game at higher ranked Mountain Pointe in the state playoffs quarter final matchup, ending their season.

“It hurts, it hurts really really bad … 11 years as head coach and I can’t think of one that hurts more,” said head coach Mr. Scooter Molander.

Brophy lost four games by a total of 10 points this year. The Broncos won the last two regular season games in overtime.

The teams battled the entire game in this match up; only one time did a team lead for an entire quarter.

Mountain Pointe received to start the game and scored on their first possession.

Brophy responded with a touchdown set up by a 40-yard run by quarterback Cade Knox ’16 and finished on a screen to Noah Pittenger ’17.

Mountain Pointe scored again making the score 14-7 Pride at the end of the quarter.

Brophy drove down the field on the shoulders of Ryan Velez ’16 who had five straight carries on the drive. The drive was capped off with a field goal by Jacob Silver ’16, making the score 14-10 with six minutes left in the first half.

Velez finished with 22 carries for 147 yards and another 94 yards on kick returns. He averaged 6.6 yards per carry.

“If he isn’t a D1 running back I don’t what is, I just don’t know what people are looking for,” Mr. Molander said. “He is (the best running back in the state)… he is just remarkable, I’m going to miss guys like that and not just on the field but off,” he said.

Brophy forced a three-and-out on the next possession for the first defensive stop of the game.

The offense quickly moved down the field and finished with a three yard touchdown rush by Velez.

Mountain Pointe responded with a touchdown with only nine seconds remaining in the half. Brophy would take a knee and go into the locker room trailing 21-17.

The third quarter was scoreless as both teams’ defenses made stops.

In the fourth quarter the teams leap-frogged each other trading score after score.

The first score of the quarter came on a seven-yard Velez touchdown rush with 10:31 left in the game, giving Brophy a 24-21 advantage.

With 7:31 left in the game, Mountain Pointe’s quarterback rushed for a 53-yard touchdown, giving them a 28-24 lead.

On the next possession Brophy scored on a three-yard pass from Knox to Tecory Robinson ’16, which gave the Broncos a 31-28 lead.

Brophy refused to go down as Knox scrambled on fourth and 12 for a first down and was hit late out of bounds, giving Brophy good field position with 41 seconds left.

Knox finished with 81 rushing yards and 125 passing yards at the end of the game.

Brophy had the ball on the 16 after a completion to Pittenger with five seconds left.

Knox threw a pass intended for Pittenger across the middle and it was deflected. With one second left on the clock the Broncos had one more shot to the end zone.

On the final play of the game, Knox threw Pittenger’s way once again on a fade route to the corner of the endzone, but the throw came up short and was intercepted in the endzone, ending the game 35-31.

“We were in great position, we even got the one second at the end, I liked our chances all the way through, we just couldn’t pull it out at the end,” Knox said.

“It would’ve been nice to win a game by a couple touchdowns but that’s not how it ended up, we were on both sides of it throughout the year,” he said about all the close games.

The Broncos finished the year 7-5. Brophy lost to Hamilton in the state semi-finals in 2014. 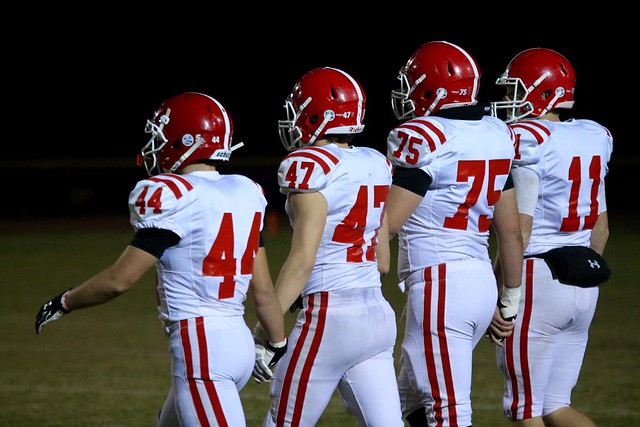