Brophy holds off Pinnacle rally to win in 2 OT

Photo by Michael Placenti ’19 | Gabe Mendoza ’16 makes 97-yard flea-flicker touchdown catch Nov. 6 to give Brophy a lead over Pinnacle. Brophy defeated Pinnacle 38-37 in double overtime in the first round of the 2015 Division 1 state playoffs.

By Henry Erlandson ’16
THE ROUNDUP

Brophy advances to the second round of the football playoffs after narrowly defeating Pinnacle by one point at home Nov. 6 in double overtime.

Ryan Velez ’16 scored both of Brophy’s touchdowns in overtime on two running plays to put Brophy ahead, sealing the victory after Pinnacle missed the extra point that would have tied the game.

Brophy kicked to the Pioneers to begin the game and forced them to punt after Pinnacle lost 16 yards on a fumbled lateral attempt.

Brophy marched down the field on their first possession for an 80-yard drive to score the first points of the game on Velez’s three-yard carry, making the score 7-0.

The first quarter ended with the ball in Pinnacle’s hands after both Brophy and Pinnacle had to punt, keeping the score at 7-0.

Pinnacle tried a fake punt on fourth down and 2 but was stuffed by Rexx Tessler ’17 to give Brophy good field position on their opponent’s 48-yard line. However, they could not capitalize after a missed 27-yard field goal attempt with 9:30 remaining in the first half.

Brophy got the chance to score again before the second quarter ended but a fumbled snap resulted in a fourth and 41 and a punt with 4:53 to go in the half.

Pinnacle got its first points of the game on a 37-yard field goal in the waning seconds of the first half to make the score 7-3.

Brophy received to start the second half and put together a drive with 14-yard passes to both Noah Pittenger ’17 and Gabe Mendoza ’16, but missed a 31-yard field goal with 8:03 left in the third quarter.

Pinnacle took the ball on their own 20-yard line and managed to get down the field after a roughing the kicker penalty on Brophy gave the Pioneers a fresh set of downs.

Pinnacle eventually took their first lead of the game on a 45-yard touchdown pass on a fourth down and 18 to make the score 10-7 with 3:36 left in the third quarter.

The Broncos responded after being pinned down inside their own 5-yard line with a flea flicker thrown by Velez to Mendoza for a 97-yard score to give Brophy a 14-10 lead.

“A play like that brings back the energy and keeps us motivated and that is how this team is going to keep going in these playoffs,” Mendoza said.

Pinnacle quarterback Spencer Rattler ’19 connected with his wide receiver on a 45-yard touchdown pass to shrink Brophy’s lead to 21-16 with 4 minutes to go in regulation.

After Knox threw an interception inside the opponent’s 20-yard line, Rattler found his receiver for another touchdown to give Pinnacle the lead with 59 seconds left in the game.

However, Brophy managed to tie it up at 24-24 and force overtime on a 37-yard field goal from Jacob Silver ’16.

“We’re getting better and what I really love is the resiliency of our team. Certainly we make mistakes sometimes like everyone else but we keep fighting and that is the character that translates to real life,” said head coach Mr. Scooter Molander.

Brophy started the first overtime with the ball and scored on a 10-yard rush from Velez, which Pinnacle matched to make the score 31-31 and force a second overtime.

Velez scored again for Brophy on a fourth and goal play, giving Brophy a 38-31 lead.

“Coach asked me what I wanted and I told him give the ball to Ryan,” Knox said. “I think he got hit five yards behind the line but took everyone with him and got in.”

Velez capped off the night with over 150 yards on the ground and four total touchdowns.

Pinnacle managed to score a touchdown in their next possession but missed wide on the extra point, giving Brophy its first playoff win this season.

“I am so proud of our guys for fighting for more than four quarters,” Mr. Molander said. “We just beat a very good football team.”

Brophy will advance to the next round and take on Mountain Pointe away Nov. 13. 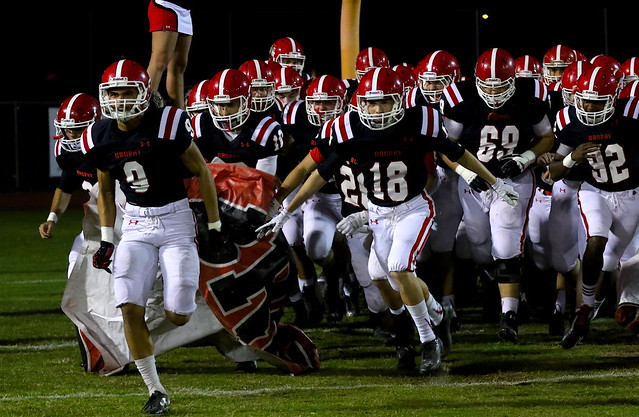